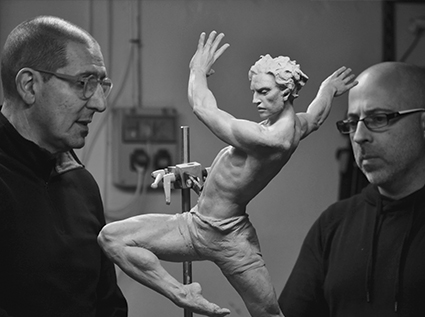 The human being as the core of art

Coderch&Malavia is a sculpture project in which the human body is at the core of the plastic discourse. A universe of meaningful forms centred on the idealised human figure. And a clear horizon: Beauty as an everyday tool. Joan Coderch and Javier Malavia came together in 2015 to carry out sculptural work featuring a refined technique, which is present from the modelling in the studio to the final piece cast in bronze.

Joan Coderch was born in 1959 in Castellar del Vallés, Barcelona, and he graduated from Barcelona’s Faculty of Fine Art in 1984. Javier Malavia was born in 1970 in Oñati, Guipúzcoa, and he graduated from Valencia’s San Carlos Faculty of Fine Art in 1993. Once they met, they discovered their artistic similarities, which led to their undertaking this new project that follows in the footsteps of masters of figuration such as Maillol, Rodin, Marini and Bourdelle.

Part of the originality of their art lies in the way they work, since they make their sculptures four-handed, thereby sharing in the creation of the pieces. Joan and Javier also have in common the values of their artistic creation, such as social commitment with regards to equality, the environment and childhood.

Their project stands out due to its honesty and authenticity: they explore different human attitudes to life, in which mimicking nature, the search for emotion through the work, the revealing of the feelings that direct man, the encounter between the figure and posture, and the combining of beauty and discipline feature prominently. The human being is at the core of their art.

From the very beginning, Coderch and Malavia have managed to position themselves as outstanding figurative artists. They received the Reina Sofía Painting and Sculpture Prize for their “Hamlet” artwork in 2017 and won First Prize at the 14th ARC International Salon Competition with the sculpture “The Swan Dance” in 2019. Their other awards include the Mariano Benlliure Sculpture Medal, the TIAC Art Prize or the Arcadia Contemporary Award.

In addition to being nationally and internationally renowned, their work forms part of private collections in several countries of Europe, Asia and America. They display their work in collective and individual exhibitions in both private entities and public spaces. Many venues in France, the United States (Miami), Mexico, Italy or Greece have had the opportunity of enjoying their works where they regularly exhibit. They were present in Berlin’s Urban Nation Biennial with their “Learning to Fly” piece in September 2019.

In 2018, they held an individual exhibition in Amsterdam’s Galerie Mokum.

In Spain, they have exhibited in the most important cities, such as A Coruña, Barcelona, Granada, Ibiza, Madrid, Valencia or Malaga.

Joan Coderch and Javier Malavia currently work in Valencia, in an old 400-square-metre industrial building, which also serves as a private exhibition space for their entire collection. 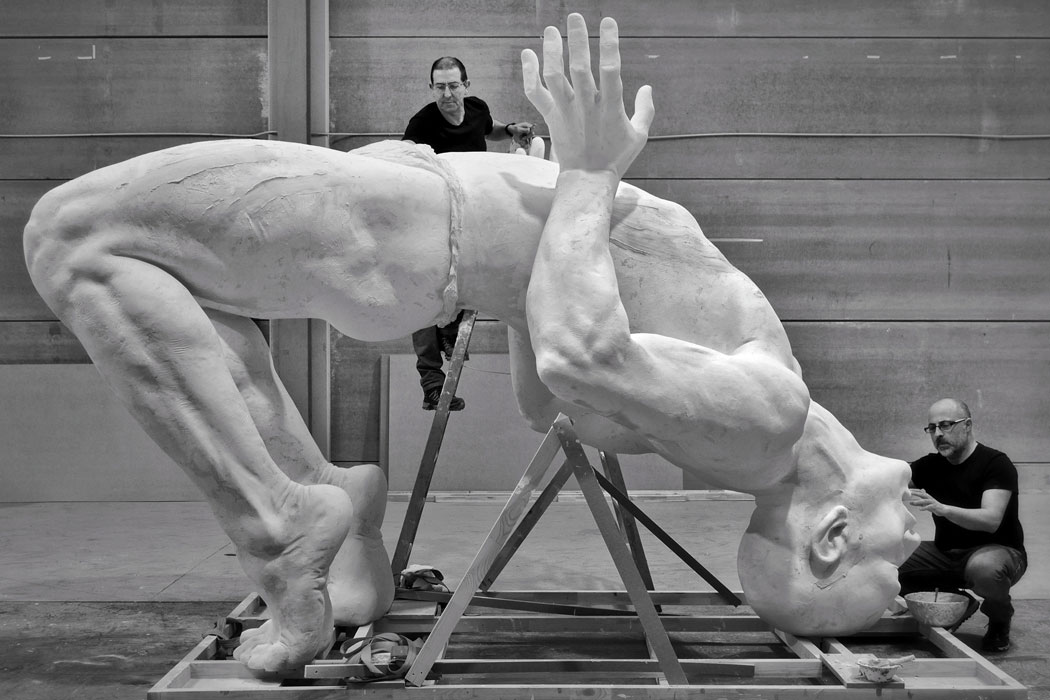 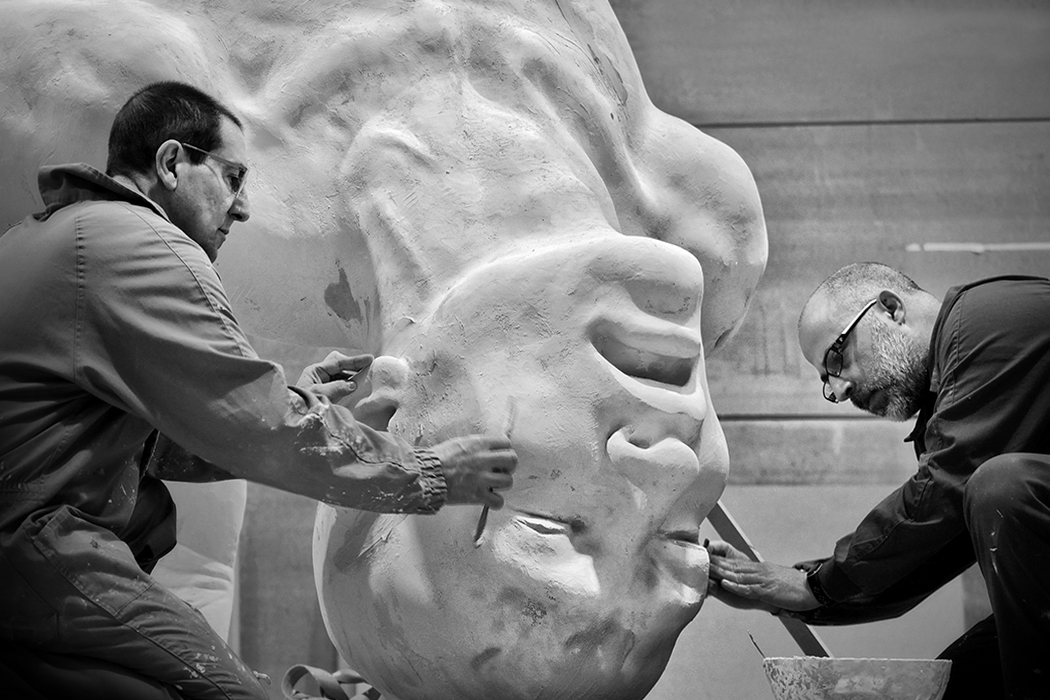 The work of Coderch and Malavia:
Arrested action, inner distance

Every beautiful work is closed.
It shines silently

As if it were a relay race, many are the references that artistic creation borrows from Culture, returning them enriched with more arguments and offering them as witnesses of the new times. All of them resound at the back of the collective memory, forming solutions in order to partially reveal the mystery in which man is immersed, the mystery of life.

At the end of the 19th century, the poet Rubén Darío wrote:

…” And above the blue water the knight
Lohengrin and his swan, like a chiselled
travelling tympanum, with its arched
S-shaped neck…”

The poet is referring to the soft, white shape of the bird on top of the infinite horizontal plane, gently gliding, without pausing, over the nocturnal waters in silence, in an image provided for visual contemplation. Its curves are a delight to the eyes; its placid wandering similar to that of a mass of ice chiselled by a sculptor.

Previously, Germany’s medieval tradition related how the knight arrived in a boat pulled by a swan, in order to defend a damsel with just one condition –not to ask his name. Swan, damsel, silence and death are elements of a narration that would then inspire the story of Wagner’s Lohengrin opera.

Later on, this German myth led King Louis of Bavaria to build his palace with white stone on the top of green hills, in the midst of the northern clouds and dampness, thereafter calling it The Stone Swan: one more image alluding to a large white mass whose stillness is presented for the pleasure of contemplation.

Musäus’ The Stolen Veil, continuing this tradition, became the story that inspired Tchaikovsky’s Swan Lake, a ballet of extraordinary beauty that relates how Prince Siegfried falls in love with the nymph Odette, who is turned into a swan by a spiteful curse.

As a continuous thread, literature, music or dance gradually reveal to us the different layers that deepen our knowledge. They are the beginning and end, the starting point and driving force for the delight of those that contemplate the world, endeavouring to possess part of the beauty within it. Sculpture is another great pillar of human expression. Seduction and fantasy arise from its masses and turn the material into an object of thought. They often do so due to similarity, sometimes due to evocation and, on other occasions, to resonance with other arts. They do so and move us with the characteristic arguments of their discipline. Just as painting expresses itself with colour, dance with the movement of the body and light, sculpture uses the proportion, shade, balances and textures of the material to move the sensitive spectator.

I have been fortunate to become well acquainted with Coderch and Malavia’s art, a work of refined sculpture that relates certain stories inspired by literature or music. Sometimes they depict classical myths and, on other occasions, popular or traditional ones. They place and exhibit their pieces under the influence of light, in which the outlines never end or invite us to contemplate them in movement, a peripatetic contemplation. The sculptures respond to light, invoking the gaze that becomes trapped in them. The light on these works turns into a gift; it is, in the words of the poet Claudio Rodríguez, clarity thirsty for form.

The depiction of the human body in Coderch and Malavia’s work becomes poetry. It is the substance of contemplation and pleasure. With them, the myth of the swan once again embodies pieces such as the ones entitled Odette or Swan, whose frozen images take us to Tchaikovsky’s ballet in which the dancers’ bodies are expressed in full tension. Odette, half woman, half swan, offers the spectator a female body of extraordinary beauty at the moment when she closes her wings above her head, to be transfigured and disappear, condemning her beloved Siegfried to loneliness. Siegfried, in turn, is depicted dancing in Swan soul, hyperkinetic and frozen in the middle of a pirouette during a desperate dance.

Constructed by adding volumes together, worked by clay or wax modelling, they end up cast in bronze with a desire to last forever. Truth, Goodness and Beauty, the three Platonic principles, are contained in these sculptors’ artistic work. Each of the pieces is conceived to survive the passing of time. The material in their hands acquires expressiveness and forcefulness. They model the human body in classical fashion, featuring figures that are always full of tension and movement, making the material speak elegiacally, sometimes bucolically, other times lyrically, but always with a high degree of poetry; always placing their images close to the limits of beauty.

Their piece entitled The tissue of time, which depicts the patient Penelope, awaiting the uncertain arrival of Odysseus, is placed before the spectator with her eyes fixed on a space and time that is alien to her being; the veil she is weaving binds her hands, neck and head, and drops down in front of her, far below her feet. Unstable balance, perfect anatomy and complete beauty.

All of their pieces depict intense moments in the lives they relate, in the myths they evoke, but they are all suspended in an evident enigma. The spectator inevitably wonders about the instants before and after the frozen action. This uncertainty is part of the mystery, the very centre of the aesthetic circumstance of these works. In Learning to fly, the moment when Icarus is about to jump, his fears, whether his wax wings will withstand the sun’s heat or what he is thinking, are some of the mysteries to be solved. In all of these works, we find the “action” concept that suggests a certain theatre-like quality in their arguments.

Coderch and Malavia also offer us the sculpture of a dancing faun, most probably drunk, completely mobile, but full of youth and beauty. The faun is a mytheme that runs through the channels of culture; he is a sensual being, sometimes brutal, half man, half he-goat, who is present in bacchanalia, accompanying the dancing Maenads and the musicians of the night. Mallarmé’s famous poem L´après midi d´un faune relates how the faun, while wandering in front of the smooth lagoon on his island of Sicily, during the burning hours of midday, mistakes two swans in the reed bed for two nymphs of the forest and feels a great urge to possess them… A poem that once again evokes the imagery of Coderch and Malavia; it also inspired Claude Debussy’s wonderful musical piece of the same name and the famous ballet choreographed by Nijinsky.

As we know, Culture is an inexhaustible source with which to construct, piece by piece, the grand building of knowledge. Coderch and Malavia are another two actors in this beautiful human process that is Culture.